We try not to miss a single invitation to have dinner at an Italian’s home.  Despite the effort it takes to eat an ungodly amount of food, in the end, it’s worth it.  In the end, an invitation means we get to participate in one of Italy’s greatest rituals: surrounding a table with great people then completely covering it with platters of regional food cooked with family recipes.  By now we’ve learned the etiquette:  Ignore the hostess when she says “bring nothing” because “something” is expected whether it is a dessert, a bottle of wine, flowers (or all three.)  We also know to expect a late night.   Finally, there is no helping the hostess clean up.  I’ve never seen an Italian guest even make an offer.  And any attempt from us has been quickly refused.  The rest goes without saying:  eat a lot (always clean your plate) and accept seconds (say, “Bis, per favore!) if you want to compliment the cook. 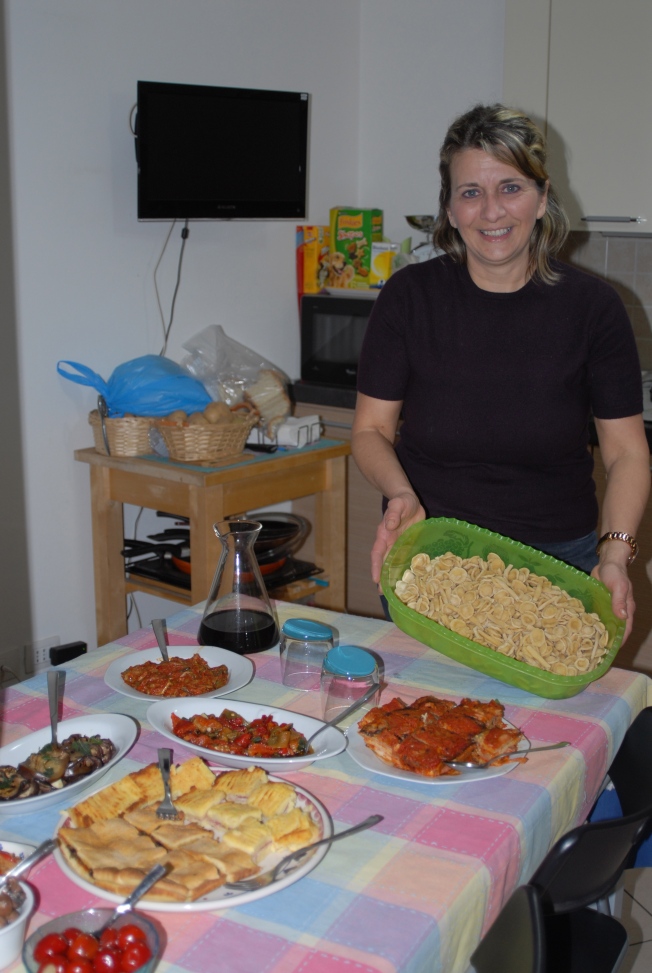 Dinner at Giovanni and Maria Pia’s.

All of the courses were typical Puglia dishes since Maria Pia grew up in southern Italy.

When we eat at Milena and Sergio P.’s, Milena’s parents do the cooking.

When we eat with Paola’s family, we are served traditional Umbrian specialties.

In-between courses at Fabiola and Sergio D.’s:  Fabiola cooked eggplant parmesan and pizza from her home town of Naples.  Sergio poured the kids a glass of wine.

Last week we had dinner with several friends at Chiara and Emilio’s house. We could tell they had been cooking all day. Here’s the  homemade tagliatelle that Chiara rolled and cut that afternoon.

The meat course was a roasted chicken that was out of this world. Chiara shared the recipe (see below).  I also learned how to cut up the cooked chicken “Italian style”. Here is Emilio’s brother-in-law with the “chicken scissors”.

Tonight we are having a guest for lunch.  My friend Stacia is taking a little R&R from her sailing job in Sardinia.  We want to show her some of the things we’ve learned to make.  I will try to replicate Chiara’s chicken.  She told me that the best way to add favor and keep the chicken moist is by making little incisions in the meet and stuffing it with lardo.  By the way, lardo is not lard (but it’s close).  It is not rendered or hydrogenated like the familiar lard from Grandma’s kitchen.  There are two kinds found in Italy.  The first is a Tuscan specialty: cured and seasoned fat from the back of a pig.  It’s common over here.  In fact, we’ve ordered it in a restaurant where it comes in thin slivers on top of bruschetta.  DE-licious.  The second kind of lardo  is what we use to stuff this chicken.  It is ground and seasoned pork fat.  It tastes like like the white part of bacon.  In fact, that might make a good substitute if you can’t find it in an Italian specialty store.

Generously sprinkle a chicken all over with a tablespoon of salt, a generous amount of pepper and two cloves of finely chopped garlic.

Next, make six slits into the bird.  Try to cut where the legs and wings join the body as well as into the breast (see below).

Stuff the lardo mixture into the incisions.

Lay several rosemary branches alongside the chicken and tie with string.

Set into a pan and drizzle with a little olive oil and then pour a half bottle of white wine over the chicken.

Cook in a 425 degree oven (220 degree celsius) for two hours.  Flip the chicken every 45 minutes then spoon the liquid from the pan on top.  If you need more liquid, add more wine or water.

When it’s done, cool for a while.  Chiara cooked the chicken before we arrived and we ate it at room temperature.  She showed me how to cut it up with a scissors which was so much easier than using a knife.

To cut like Chiara, use a scissors strong enough to cut through bones.  Her’s look like garden pruners.  Begin by pulling the legs and wings away from the body and severing between the joints.  Then, cut through the breast bone until the chicken is in two halves.  From here, it’s very easy to cut away from the bone and serve it in pretty, small pieces.

The holes are stuffed with lardo and the chicken is ready to cook.

Four hours later . . . Our guest arrived.  We served prosciutto and melon, pasta carbonara, fava beans with artichokes and a platter of chicken.  Matt and Stacia are sipping limoncello as I write these final words.